In 2008, Portland lost one of its most popular restaurants when Taqueria Nueve shut its doors. Since then, Taqueria Nueve fans have been longing for the return of T9’s signature dishes and friendly service. We are excited to say that we are OPEN! Come dine on wild boar tacos, octopus coctel, caeser con ceviche and fresh squeezed margaritas.

The original concept for Taqueria Nueve began to take shape in Billy’s mind long before its original opening date in 2000. Billy toured Mexico in the late 90’s and was welcomed into the homes of Mexican families where he found inspiration in Mexican customs, culture and recipes. When it opened in 2000, the original Taqueria Nueve became an instant success, immediately forming our loyal T9 family that has remained in Portland to this day.

Billy met Brent Richford in 1998 when they worked together at Paley’s Place in Portland. The two have remained close amigos ever since, including when Brent worked at Taqueria Nueve in the early 2000’s. When the opportunity to re-open Taqueria Nueve presented itself, Brent and Billy replied with a resounding, HELL YES! 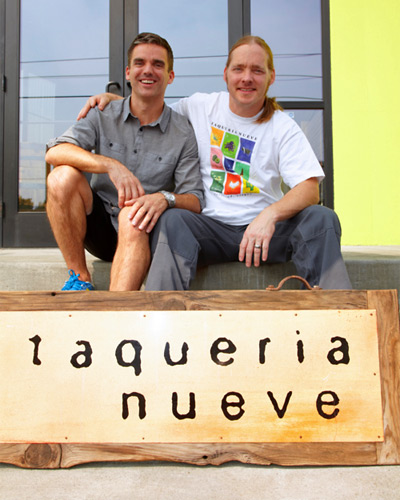 We are open Thursday, Friday, and Saturday from 3-8pm